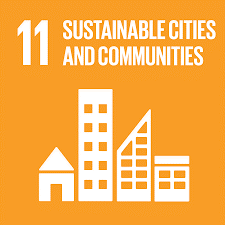 11.1 By 2030, ensure access for all to adequate, safe and affordable housing and basic services and upgrade slums

11.2 By 2030, provide access to safe, affordable, accessible and sustainable transport systems for all, improving road safety, notably by expanding public transport, with special attention to the needs of those in vulnerable situations, women, children, persons with disabilities and older persons

11.3 By 2030, enhance inclusive and sustainable urbanization and capacity for participatory, integrated and sustainable human settlement planning and management in all countries

11.4 Strengthen efforts to protect and safeguard the world’s cultural and natural heritage

11.5 By 2030, significantly reduce the number of deaths and the number of people affected and substantially decrease the direct economic losses relative to global gross domestic product caused by disasters, including water-related disasters, with a focus on protecting the poor and people in vulnerable situations

11.6 By 2030, reduce the adverse per capita environmental impact of cities, including by paying special attention to air quality and municipal and other waste management

11.7 By 2030, provide universal access to safe, inclusive and accessible, green and public spaces, in particular for women and children, older persons and persons with disabilities

11.B By 2020, substantially increase the number of cities and human settlements adopting and implementing integrated policies and plans towards inclusion, resource efficiency, mitigation and adaptation to climate change, resilience to disasters, and develop and implement, in line with the Sendai Framework for Disaster Risk Reduction 2015-2030, holistic disaster risk management at all levels

More than half of humanity – 4.2 billion people – lives in cities today and by 2030, it is estimated that six out of ten people will be city dwellers. By 2030, the world is projected to have 43 megacities with more than 10 million inhabitants each, most of them in developing regions. However, some of the fastest-growing urban agglomerations are cities with fewer than 1 million inhabitants, many of them located in Asia and Africa. While one in eight people live in 33 megacities worldwide, close to half of the world’s urban dwellers reside in much smaller settlements with fewer than 500,000 inhabitants. The world’s cities occupy just 3% of the planet’s land but account for 60-80% of all energy consumption and 75% of the planet’s carbon emissions. Rapid urbanisation is exerting pressure on fresh water supplies, sewage, the living environment and public health. Our rapidly growing urban world is experiencing congestion, a lack of basic services, a shortage of adequate housing, and declining infrastructure. More than thirty percent of the world’s urban population lives in slums, and in Sub-Saharan Africa, over half of all city dwellers are slum dwellers.

Cities are engines for sustainable development. It is where ideas, commerce, culture, science, and productivity thrives. Urban spaces offer opportunities for people to prosper economically and socially, but this is only possible in prosperous cities that can accommodate people in decent jobs and where land resources are not overwhelmed by growth. Unplanned urban sprawl, as cities spill beyond their formal boundaries, can be detrimental to national developmental planning and to the global goals for sustainable development. Our urban areas are also emitters of greenhouse gases and contribute to climate change. Half of the global urban population breathes air that is 2.5 times more polluted than standards deemed acceptable by the World Health Organization.

What can we do to address this?

These challenges to urban spaces can be overcome by improving resource use and focusing on reducing pollution and poverty. The future we want includes cities that offer opportunities for all, and which provide access to basic services, energy, housing, transportation and more. Cities can either dissipate energy or optimise efficiency by reducing energy consumption and adopting green energy systems. For instance, Rizhao, China has become a solar-powered city; in its central districts, 99% of households already use solar water heaters.