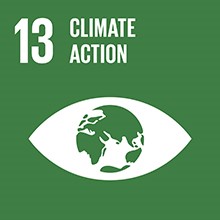 SDG13: Take urgent action to combat climate and its impact

13.1 Strengthen resilience and adaptive capacity to climate-related hazards and natural disasters in all countries

13.A Implement the commitment undertaken by developed-country parties to the United Nations Framework Convention on Climate Change to a goal of mobilizing jointly $100 billion annually by 2020 from all sources to address the needs of developing countries in the context of meaningful mitigation actions and transparency on implementation and fully operationalize the Green Climate Fund through its capitalization as soon as possible

13.B Promote mechanisms for raising capacity for effective climate change-related planning and management in least developed countries and small island developing States, including focusing on women, youth and local and marginalized communities

*Acknowledging that the United Nations Framework Convention on Climate Change is the primary international, intergovernmental forum for negotiating the global response to climate change.

The Earth’s climate is changing, with severe consequences for our daily lives and the resilience of our countries. Climate change is disrupting national economies, People are experiencing changing weather patterns, rising sea levels, and extreme weather events. Greenhouse gas emissions from human activities driving this change continue to rise. They are now at their highest levels in history. Globally averaged temperatures in 2017 were 0.90 degrees Celsius warmer than the 1951 to 1980 mean, according to NASA. 2016 was the third consecutive year in which temperatures were more than 1 degree Celsius above late nineteenth-century levels. To put this into perspective, each one degree Celsius of temperature increase in global mean temperature is estimated to reduce average global yields of wheat by 6%, rice yields by 3.2%, and maize yields by 7.4%. When averaged over all of the world’s oceans, absolute sea level has risen at an average rate of 0.06 inches per year from 1880 to 2013. Since 1993, however, average sea level has risen at a rate of 0.11 to 0.14 inches per year—roughly twice as fast as the long-term trend. Global emissions of carbon dioxide (CO2) have increased by almost 50% since 1990 with emissions increasing more quickly between 2000 and 2010 than in each of the three previous decades.

Without action, the world’s average surface temperature is projected to rise over the 21st century and is likely to surpass 3 degrees Celsius this century – with some areas of the world expected to warm even more. The poorest and most vulnerable people are being affected the most. Climate change also exacerbates disasters and combating it is absolutely vital to guaranteeing our survival and the wellbeing of future generations.

How can we address this?

It is still possible, using a wide array of technological measures and changes in behaviour, to limit the increase in global mean temperature to 2 degrees Celsius above pre-industrial levels. Affordable, scalable solutions are now available to enable countries to leapfrog to cleaner, more resilient economies. The pace of change is quickening as more people are turning to renewable energy and a range of other measures that will reduce emissions and increase adaptation efforts. But climate change is a global challenge that does not respect national borders. Emissions anywhere affect people everywhere. It is an issue that requires solutions that need to be co-ordinated at the international level and it requires international co-operation to help developing countries move toward a low-carbon economy. To address climate change, countries adopted the Paris Agreement at the COP21 in Paris on 12 December 2015. In the agreement, all countries agreed to work to limit global temperature rise to well below 2 degrees Celsius, and given the grave risks, to strive for 1.5 degrees Celsius. Implementation of the Paris Agreement is essential for the achievement of the Sustainable Development Goals, and provides a roadmap for climate actions that will reduce emissions and build climate resilience. The Paris Agreement entered into force on 4 November 2016.