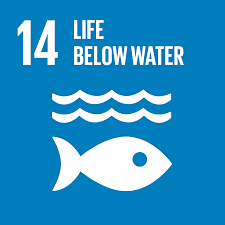 Conserve and Sustainable use the oceans, seas and marine resources for sustainable development

14.1 By 2025, prevent and significantly reduce marine pollution of all kinds, in particular from land-based activities, including marine debris and nutrient pollution

14.2 By 2020, sustainably manage and protect marine and coastal ecosystems to avoid significant adverse impacts, including by strengthening their resilience, and take action for their restoration in order to achieve healthy and productive oceans

14.3 Minimize and address the impacts of ocean acidification, including through enhanced scientific cooperation at all levels

14.4 By 2020, effectively regulate harvesting and end overfishing, illegal, unreported and unregulated fishing and destructive fishing practices and implement science-based management plans, in order to restore fish stocks in the shortest time feasible, at least to levels that can produce maximum sustainable yield as determined by their biological characteristics

14.5 By 2020, conserve at least 10 per cent of coastal and marine areas, consistent with national and international law and based on the best available scientific information

14.6 By 2020, prohibit certain forms of fisheries subsidies which contribute to overcapacity and overfishing, eliminate subsidies that contribute to illegal, unreported and unregulated fishing and refrain from introducing new such subsidies, recognizing that appropriate and effective special and differential treatment for developing and least developed countries should be an integral part of the World Trade Organization fisheries subsidies negotiation

14.7 By 2030, increase the economic benefits to Small Island developing States and least developed countries from the sustainable use of marine resources, including through sustainable management of fisheries, aquaculture and tourism

14. A Increase scientific knowledge, develop research capacity and transfer marine technology, taking into account the Intergovernmental Oceanographic Commission Criteria and Guidelines on the Transfer of Marine Technology, in order to improve ocean health and to enhance the contribution of marine biodiversity to the development of developing countries, in particular small island developing States and least developed countries

14. B Provide access for small-scale artisanal fishers to marine resources and markets

We are a land dwelling species, but we depend more on our oceans than we can imagine. Oceans cover close to three quarters of the Earth’s surface, contain 97% of the Earth’s water, and represent 99% of the living space on the planet by volume. Over three billion people depend on marine and coastal biodiversity for their livelihoods. Globally, the market value of marine and coastal resources and industries is estimated at USD 3 trillion per year or close to 5% of global GDP. Oceans contain more than 200,000 identified species, but actual numbers may lie in the millions. It is estimated that 91% of ocean species have yet to be classified, and that 95% of the ocean remains unexplored. Oceans absorb about 40% of the carbon dioxide produced by humans, buffering the impact of global warming. They also serve as the world’s largest source of protein, with more than three billion people depending on the oceans as their primary source of protein. Unmonitored fishing is also contributing to the rapid depletion of many fish species and are preventing efforts to save and restore global fisheries and related jobs, causing ocean fisheries to generate USD 50 billion less per year than they could. As much as 40% of the world’s oceans are heavily affected by human activities, including pollution, depleted fisheries, and loss of coastal habitats. Across the globe, 1,851 species of fish — 21 percent of all fish species evaluated — were deemed at risk of extinction by the IUCN in 2010, including more than a third of sharks and rays.

Coastal and marine resources contribute USD 28 trillion to the global economy every year. But this is only a small part of why they are so important to our planet. The world’s oceans – their temperature, chemistry, currents and life – drive global systems that make the Earth habitable for humankind. Our rainwater, drinking water, weather, climate, coastlines, much of our food, and even the oxygen in the air we breathe, are all ultimately provided and regulated by the sea. Throughout history, oceans and seas have been vital conduits for trade and transportation. Careful management of this essential global resource is a key feature of a sustainable future.

How can we address this?

Sustainable Development Goal 14 commits countries to unite over what is a truly global responsibility – the protection of our oceans and the lives that depend on it. By 2020, countries commit to achieving the sustainable management of marine ecosystems, and in another five years, significantly reduce marine pollution of all kinds. This will require an international scientific partnership, regulation of harvesting and fishing, and enhance our research and knowledge on issues critical to the survival of life below water.